Your office design should not be a quick decision. When you mention your office to someone, they may envision beige walls, desks, chairs, maybe a reception desk or conference table. What if, instead, they envisioned a space that represented exactly what your business does, what values you hold, and where your company is headed? An office is no longer just a building away from an employee’s residence to conduct business. Yes it is a place of business, but it should also be working for your business, just as your employees do. The design of your office should be marketing what your company does and what you value, as well as guiding interactions and setting the mood for the how your business operates. 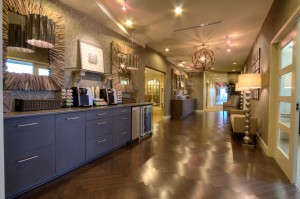 Your office space can be one of your biggest marketing tools. When a client, a potential employee, or even just a passer-by sees your space, it should represent what your company’s culture is, if your company is formal or informal, creative or traditional, is it a high energy atmosphere or meant to create a tranquil state of mind. If a client or potential client walks into your space, they should be surrounded by your company’s message. Retail spaces are often the best example of setting the mood they want you to feel when entering their space. From colors, lighting, music and smell, even to the layout and how it guides you through the inventory, retail companies spend extensive amounts of money researching how that experience will guide your actions as a consumer. Your office design should act the same. The biggest difference is, retail focuses on how the space effects the consumer, while your office should relate to both your clients and your employees. 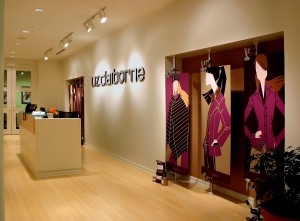 What is the perfect layout and design to create your most successful outcome? Contrary to the endless articles claiming it is the new open space layout trend, or on the opposite end of the spectrum, articles campaigning that the open space layout will be the destruction of your company, the answer is not a “cookie-cutter” solution.   Many companies such as Google, Facebook and Pixar have found great success with this open plan layout, while other companies have moved to this design and found it was not the fit they were looking for. The style that Google, Facebook and Pixar selected was not because it was the latest and greatest. Instead, they examined their companies’ culture, values and goals first, and then designed a space that would cultivate the results that they were looking for. 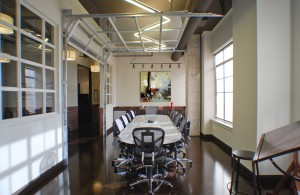 A company’s culture is created by a variety and combination of influences. Norms, values, industry, size, life cycle, work processes, and client type are some of the main characteristics people consider when thinking about the culture of their company.But surely carpet, lights and what type of chair you sit in can’t express all of that? Wrong. The reason Google, Facebook and Pixar all benefit from the open plan layout is due to their operational needs. Their companies are driven by “out of the box”, creative and collaborative thinking. Thus their environment represents these values. From Google’s “bring in the outdoors” space in London, or Facebook’s chessboard space, they have created an environment that breeds the results they want.

But what about the articles protesting the open plan layout? After all, Lindsey Kaufman’s article “Google got it wrong. The open-office trend is destroying the workplace” went viral after being published in a variety of places including The Washington Post. While many of her concerns are valid work environment concerns, they are not design issues but management issues. Yes, the open layout is a newer concept, which could likely create the necessity of reexamining appropriate work place behavior and manners. 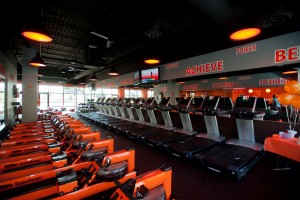 There is also a misconception regarding the open space office. Unlike the vision that many of the anti-open plan layouts give, it does not mean one big open room with crowded random tables scattered about. These types of offices will often have a few private offices, private conference rooms, and “get-away” areas like Google’s meeting eggs, as seen below from their culture page, and many other areas for the sometimes necessary “quiet spaces”. However, the open layout is meant to provoke conversation and creativity as inspired by these pictures from some of Google’s spaces. Facebook, a leading social networking company, realizes the importance of their space representing their company culture through their “bull pen” like set up. Facebook explained this layout is “designed to evoke the company’s ethos of openness” according to Time’s “Inside Facebook Headquarters” photo tour.  Offices that tend to benefit most from this type of design are companies which rely heavily on communication between co-workers, and tend to have a younger employee base. 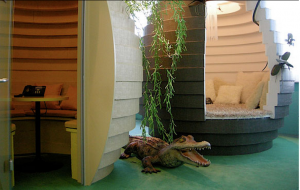 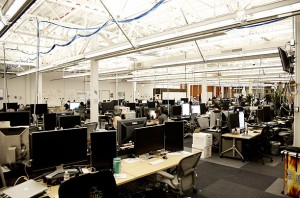 On the other end of the scale from the recent popular open office design, are companies that rely on more traditional office formats. These companies are often dealing with sensitive and highly confidential information, therefore their clients look for environments that reflect that brand and culture. These spaces still require a highly proficient environment, so you may see more traditional minded components such as private offices, conference rooms and higher work station environments. You may also see more traditional materials to represent the image they want to project. 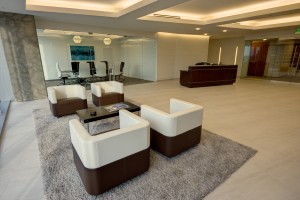 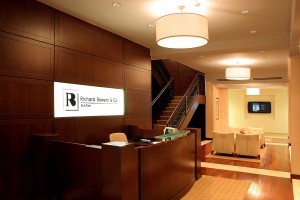 A company’s internal operations can also be heavily influenced and even lead by office design. Pixar took notice and implemented the open space layout for exactly that reason. According to Adam Alter’s article, “How to Build a Collaborative Office Space Like Pixar and Google”, Steve Jobs completely redesigned the layout of Pixar’s office after realizing that it originally housed computer scientists in one building, animators in a second building, and executives and editors in a third. That created great strength within those individual groups, however discouraged them from sharing ideas and solutions. By combining these different groups, it opened doors to stronger communication and exchange of ideas between unlikely collaborations. In addition, this layout allowed for a better understanding of each other’s work and contribution to the company’s output. 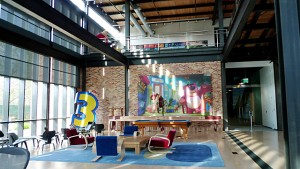 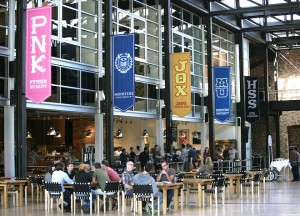 Google has created a similar environment by implementing the “150-Feet from Food” rule, creative spaces and a variety of group activities such a bowling, foosball, and pool, hoping to create conversation and interaction between employees that otherwise may not interact. Google’s integration of free food available within their offices has also been noted to keep employees on site, producing more and ultimately creating a feeling of appreciation that has contributed to Google’s fifth time being ranked #1 on Fortune’s “Best Companies” list. 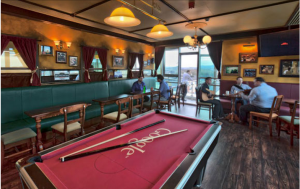 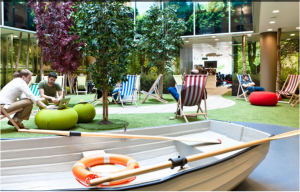 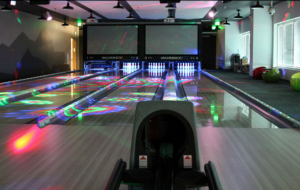 In addition to more obvious appearances such as bright colors to represent energy, or community spaces to encourage communication, one’s office furniture represents the company as well. When we redesigned Habitat for Humanity’s administrative headquarters in Atlanta Georgia it was important to them that the furniture be preowned showing their frugality. Habitat for Humanity is an International non-profit organization that works to build houses for those in need, devoted to helping resolve the poverty issues around the world. The moment you walk into their office, you can see their values and culture. From common building materials such as brick, wood planks, and sheet metal to the pictures that hang around their lobby of volunteers building homes, to the preowned furniture, Habitat for Humanity’s entire office not only represents their culture to those who come in to visit, but helps to remind and energize their employees and volunteers the great cause they are working toward. 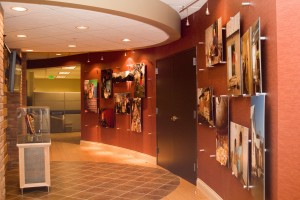 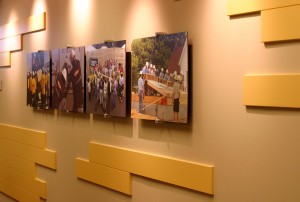 Even within an individual’s industry, there is not a set way your space should be designed. Without companies willing to go against the traditional route and try something new, society would never grow. Bull Realty in Atlanta, is a perfect example of this. As a commercial real estate brokerage company, they have chosen a more progressive design for their office rather than the traditional brokerage firm model. Bull Realty has incorporated daylight, community spaces including a pool table that turns into a conference table, and a recording studio which owner Michael Bull hosts his nationally syndicated radio show, “The Commercial Real Estate Show”. 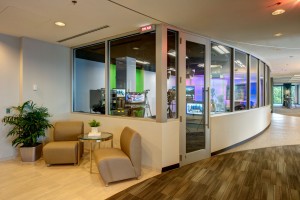 Through each of these companies, you can see there is no one design that is perfect for all. Every company needs to examine who they are, determine how they want to be perceived both internally as well as to the public, and make a plan where they’re going in the future. Every office should be living and growing with the world around it. In order to stay competitive, every company needs to identify and examine the components that drive its company’s culture and design their office to meet those needs.